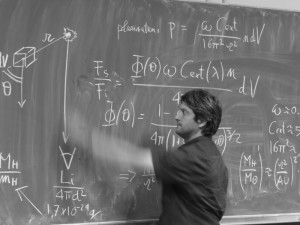 
Nando’s passion for astronomy started in 1975, when he looked at the Moon with his father’s 6×30 binoculars. That vision impressed him for the rest of his life, and led him through the early years of his education.

After studying at Liceo Scientifico L. Magrini in Gemona (Italy), in the autumn of 1985 Nando moved to Padua, where he started his career in astronomy just in time to be blessed by Halley’s comet passing close to the Sun. After spending on year at the Asiago Astrophysical Observatory and a two years studentship in Munich, he obtained his PhD in astronomy in 1996. In 1997 he taught maths in Italy and at the end of that year moved to Chile, where he was offered an ESO post-doctoral fellowship.

Nando first worked with the 2.2m telescope team and then moved to the 3.6m group, where he acted as an instrument scientist. During that period of time he was involved in the study of a particularly striking supernova.

In 1999 Nando was offered a staff position in the Quality Control Group and so moved back to ESO-Garching, where he was in charge of Very Large Telescope instruments. From 2001 to 2011 he worked in the User Support Department. He is currently Head of the Observing Programmes Office.

Nando mainly works on optical photometry, spectroscopy and spectro-polarimetry of nearby supernovae of all types. His other interests include statistical data analysis and atmospheric physics related to ground-based astronomy. In his spare time, (which is not much, having four kids!) he plays the piano and flute, carries out archaeoastronomical research and explores contaminations between science and arts.

For more details on Nando’s scientific activity, have a look here.