A wonderful concert by Glauco Venier in Cologne

Back from the light design conference in Drammen – Norway

Music has always been a relevant ingredient in my intellectual life. If I had to summarize it in a few words, I’d say I am not sure what I really am: a failed musician or a failed scientist 😉 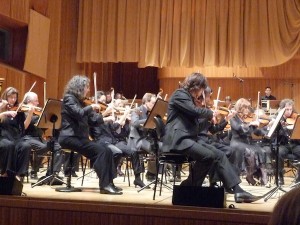 The WDR orchestra at Glauco's concert (photo by the author).

As you may remember, I have a very good and old friend, Glauco Venier.  He is a jazz piano player and composer, specialized in contaminating jazz with traditional music from Friuli, the region of N-E Italy from which we both come. His music has played quite some role in my activities, and some years ago, together with the Italian actor (and friend) Massimo Somaglino we have put together L’Ombra della Terra (the shadow of the Earth). You’ll find a post on this here. His fame has been growing quite a lot in the last years, with some very successful productions in collaboration with the British singer Norma Winstone and the German saxophonist Klaus Gesing. Since then he is continuously in tour around the world. This notwithstanding, he has remained a very friendly and open person, deeply rooted into his homeland and its traditions. These are a very fertile source of inspiration for his compositions. At some point, his music reached the ears of nobody less than Manfred Eicher, famous founder and producer of the notorious ECM Records. This has so far turned into two beautiful CDs, “Distances” and “Stories yet to tell“. 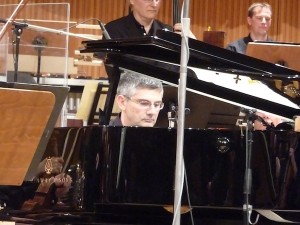 Glauco Venier in Cologne, playing with the WDR Orchestra and Big Band (photo by the author).

I remember that more or less one year ago, during one of our friendly meetings, Glauco has shown me a letter from the Westdeutscher Rundfunk, where a very interesting project was described. A concert in Cologne, in which Glauco’s music, arranged by Michael Abene, would be played by the WDR Symphony Orchestra and the WDR Big Band. You know, one of those “wow” things that make you breathless. I promised him that I and a group of old friends, all from Friuli, would join him there, no matter what. And so was it.

Last Wednesday, Adele and I left Munich airport to Cologne, where we joined a group of good old friends, arriving from Friuli. Meeting people that you have known since your childhood in a foreign country is always very special, and this time was no exception. We had great time, touring around Cologne, visiting the imposing cathedral, a few museums, and a number of Knaiben, where we tasted many times the local Koelsch bier. But all the expectation was building around the concert at the WDR auditorium, right in the center of Cologne. Having a friend playing there, with one of the most renown orchestras and big bands of all Germany is an event that does not happen so frequently. 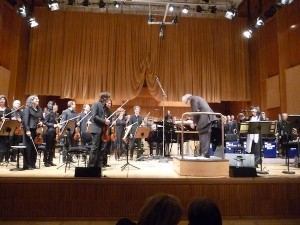 Michael Abene, the WDR orchestra and Big Band, and Glauco Venier (photo by the author).

On top of that, from Glauco we had some anticipation about the program, which would include traditional songs from the Friulian area, sang in our native language by the Italian singer Diana Torto. I had the chance to listen to her beautiful voice last summer. A great singer, no doubt, featuring an extreme control of her voice, mixed to a warm Italian style.The WDR Orchestra and the Big Band (for a total of more than sixty players on the stage) were going to be directed by the American composer and arranger Michael Abene, and by the young, promising British director and composer Jules Buckley. In the sight of all these facts, we dressed up and showed up at the concert hall well in advance, to find a place in the front rows. You can only imagine the emotion. The auditorium was packed with people. Following the most pure German style, the concert started at eight o’clock, and was broadcast live through the WDR-3 channel. I hope a CD is going to come out of this, because there is no way I can describe it. Fantastic is probably the word. But it was much more than that. Already from the very incipit, which was a monodic theme from the ancient tradition of Aquileia singed solo by Diana Torto, the concert was a sequence of deep emotions. My friends and I were moved, several times… 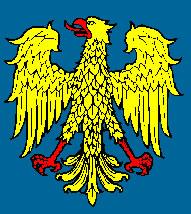 At the end of the concert, during a never ending series of applause, we pulled out the old flag of Friuli, dating back to the times when this small region was a patriarchal state. I guess that was something unheard off in the WDR concert hall, and it certainly created some curiosity, especially when Glauco, from the stage, finally noticed it. He pulled out a small, identical flag, he had kept on the Grand Steinway & Sons for all the concert.

Where is the Roman Watch Tower?