The Great Debate is tomorrow!

The curtain falls on the Light Symposium 2010

The Great Debate is Today!

Tomorrow Pavel Kroupa and Simon White will publicly debate on Dark Matter. The Colloquium is going to be held at the University of Bonn, in the context of the Bethe Lectures. As far as I understand from Pavel, it will be videotaped, but there will be no live broadcast.

For your convenience, here is a summary of the event:

The subject of this months Bethe Colloquium concerns a question at the interface of cosmology, astrophysics and elementary particle physics: the possible existence of Dark Matter. The existence of Dark Matter is the most prominent proposal to account for the discrepancy between measurements of the mass of galaxies, clusters of galaxies and the entire universe, and measurements based on the mass of the visible matter. So far the existence of Dark Matter is inferred from gravitational effects on visible matter and background radiation and not through direct detection. In his talk Professor S. White introduces the dark matter paradigm and explains its virtues. An alternative proposal to explain the observed discrepancies is introduced by Professor P. Kroupa. He argues that these effects could be due to a modification of the laws of gravity without the need of Dark Matter. The talks are followed by a discussion.

I can anticipate that, given the two brilliant personalities, and the controversial topic, this is going to be extremely entertaining and stimulating. Unfortunately I will not be able to attend. But I will try to see whether I can put my hands on an audio recording. And I will report based on that. 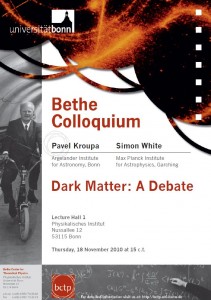