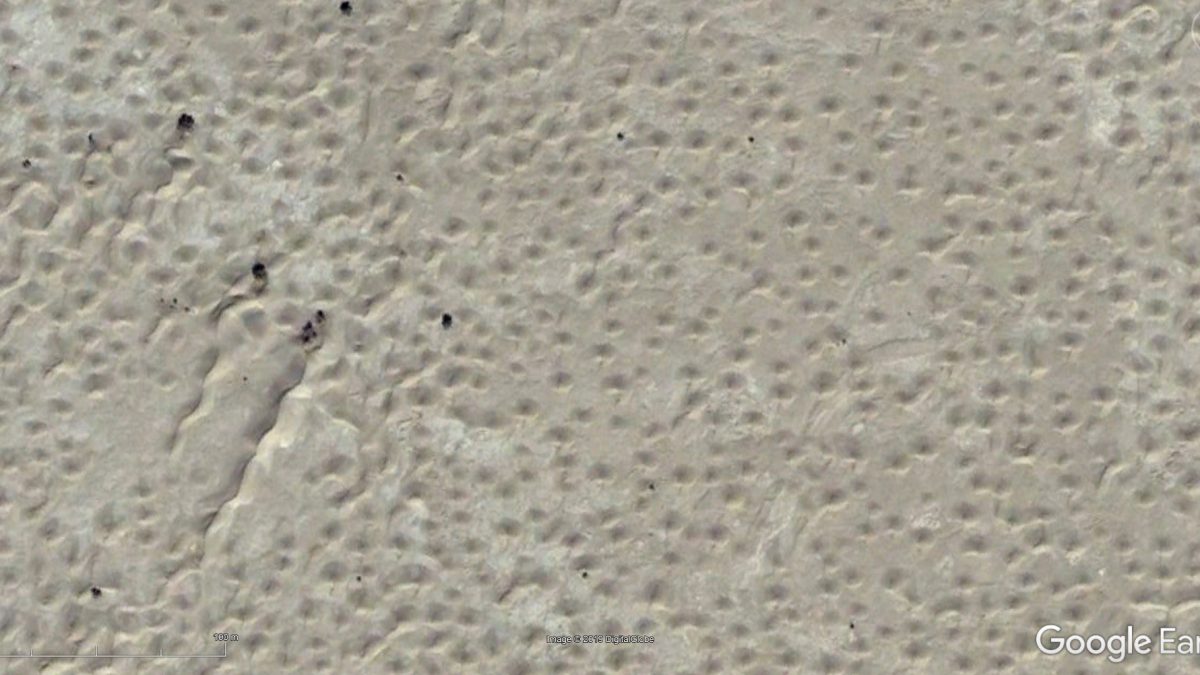 I saw an article today linked by the International Society for Aeolian Research‘s Facebook page, on the dangers of dust being lofted in Earth’s youngest desert, the Aralkum Desert in Kazakhstan. It’s where the Aral Sea used to be, decades ago. Here’s the article from Atlas Obscura.

It sounds like a difficult place to get to, and an even harder place to study. But, I thought, maybe there was something interesting to see from above. Maybe even new dunes, because rapidly exposed lake beds provide ready sources of sand for building dunes. A flat plain of sand will tend to form a field of uniformly-sized dunes, as they all grow at the same rate from a similarly sized sand supply.

So I went to have a look with Google Earth Pro.

And, yeah, I found a vast field of tiny little dunes. Here’s a tiny bit of one of them: 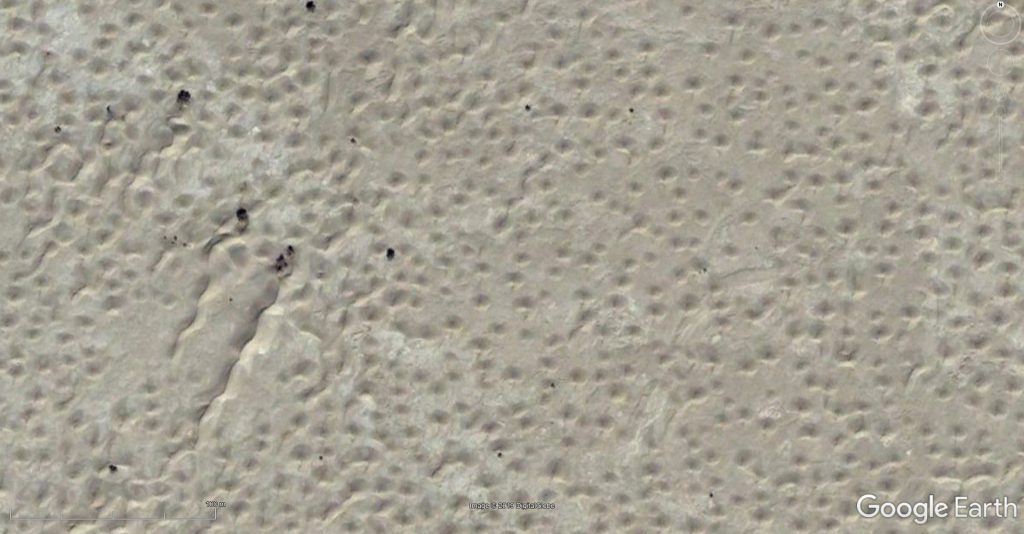 Tiny baby dunes forming where the Aral Sea used to be, made with Google Earth Pro.

These little 7 to 9 m (23 to 29 ft) wide bumps are baby dunes! Or more technically, protodunes. They don’t have proper slip faces yet, so those little hills of sand are also called dome dunes. It looks like when they do develop them, the slip faces will be facing roughly southwest. Over time the protodunes will coalesce into larger dunes, as they merge with one another.

Where there are topographic obstacles, like bushes (those dark spots in the image, at least I’m guessing that’s what those spots are), the sand accumulates a little more readily, and more quickly forms coalesced dunes in the wakes of the bushes. Those dunes are aligned toward the southwest, like the dome dunes. It looks like maybe two winds form these dunes: one from the north and one from the east. I don’t know enough about weather in Kazakhstan to explain why those wind direction would predominate, but I can tell from the dunes that they do.

This image dates to September of 2004, and unfortunately the images in Google Earth Pro since then don’t resolve the dunes. But I’d bet any new views of this area would show how they’ve grown and merged since then.

As I’d guessed, wide swaths of the newly exposed seabed have been blown by the wind into dunes:

On the left: the eastern shore of the Aral Sea in 1973. On the right: The same area 31 years later. Made with Google Earth Pro. The little white box is the location of the image shown above.

The area with the baby dunes I showed in the first image above was under water 4 m (13 ft) deep  in 1973. By 2004 the water was long gone, and the area has turned into a desert. It looks so different now! The whole big yellow blotchy area on the 2004 image is covered in those baby dunes. It’s really neat to see how an area tens of kilometers across could turn into a sand sea within the span of a few years.

I love dunes. I love that this is a great area to watch a dune field take form. I don’t love what happened to the Aral Sea though. Here’s to hoping we can learn from this mistake in the future.