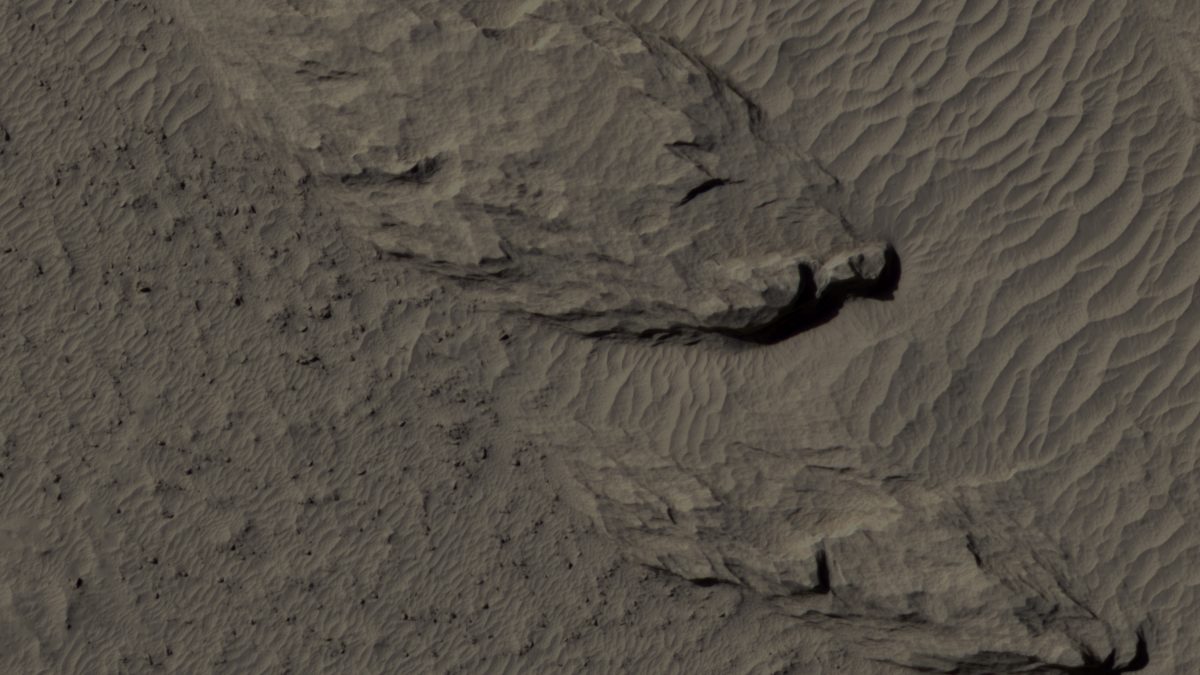 If you know my blog at all, then you might recognize the big structures as yardangs. They are part of an enormous set of yardangs on Mars called the Medusa Fossae Formation. At some point in the past, probably a few billion years ago, the wind kicked up a bunch of sand that carved out these structures, blowing from the lower left to the upper right.

But the thing to notice is the stuff around the yardangs. As the wind carved them out, it also created ripples. It’s fairly normal to find ripples, especially coarse-grained ripples, in the troughs between yardangs, because a wind strong enough to carve out bedrock is also strong enough to move the big grains that can pile up into coarse-grained ripples. These particular ripples are really big, which is typical for Mars (where they’re called Transverse Aeolian Ridges, or TARs).

Why do the TARs change in size? It could be one of two reasons: 1) the smaller TARs might be younger (because ripples and dunes tend to start small and grow in size over time), or 2) the surface the smaller TARs are on might simply have less loose material on it for the wind to build into big ripples.

It’s probably a bit of both. The bouldery surface on the lower left is actually a lava flow that wound its way between the yardangs in this area, from upper left to lower right (I don’t have a date for the flow, but I’m betting it happened at least a few hundred million years ago.) It probably flowed over and buried some big TARs (which are now part of Mars’ rock record!), but it didn’t get to the ones at the upper right. After the lava cooled, the wind kept blowing, and eventually some young, small TARs formed on top of the lava, maybe incorporating some small pebbles or granules from the lava flow. But these little TARs never got a chance to grow as big as the TARs at the upper right, either because the wind stopped blowing so hard or because there wasn’t enough sediment around for the wind to pile into TARs (lava is usually pretty hard, so it’s not easy for wind to sandblast into smaller bits).