Boston Micromachines Corporation (BMC), a leading provider of MEMS-based deformable mirror (DM) products, adaptive optics (AO) systems and scientific instruments, announced on Feb. 3 2014 that its 4K-DM is currently installed and is being used in the Gemini Planet Imager (GPI). Deployed on one of the world’s largest telescopes, the 8-meter Gemini South telescope located in the Chilean Andes, GPI is a scientific instrument which detects light from extrasolar planets. 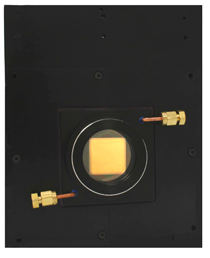 The Boston 4K-DM made of a continuous surface, with 4092 actuators and a stroke of 3.5 μm. (Boston Micromachine)

Custom built for GPI, BMC’s 4K-DM is a 4092-actuator deformable mirror spanning over a 25 mm aperture. Used as a high spatial-resolution wavefront corrector, it allows clarification of planet images obscured by light from parent stars. GPI has successfully attained its goal of searching for extra-solar planets with the help of its advanced AO system, correcting for atmospheric distortions which are common obstacles in most ground-based telescopes. 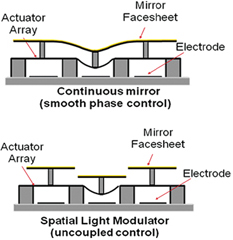 “The Boston Micromachines MEMS deformable mirror is a key component of GPI,” said Bruce Macintosh, Principal Investigator of the GPI project. “Because the MEMS is compact, we can fit an AO system with almost two thousand degrees of freedom into the confined volume on the back of the telescope, an important aspect for the instrument“.

“We are excited that GPI operated so well so quickly” says Paul Bierden, President and CEO of Boston Micromachines Corporation. “Our deformable mirror technology continues to advance, enabling extrasolar planet discoveries. I am thrilled we are able to assist the astronomical community in this innovative exploration.“

The 4K-DM offers high spatial-resolution wavefront correction for next generation applications in astronomy and laser communications. This continuous surface, 4092-actuator DM with an active aperture of 25mm is capable of up to 3.5 µm stroke with low interactuator coupling and zero hysteresis. Combined with high speed and high precision drive electronics, the DM can accomplish a frame rate of 20 kHz with sub-nm step size. BMC offers an array of other deformable mirrors systems varying in speed, stroke, actuator count and aperture size.

Gemini Planet Imager‘s first light image of the light scattered by a disk of dust orbiting the young star HR4796A. The left image (1.9-2.1 um) shows normal light, including both the dust ring and the residual light from the central star scattered by turbulence in the Earth’s atmosphere. The right image shows only polarized light. Leftover starlight is unpolarized and hence removed from this image. The light from the front edge of the disk is strongly polarized as it scatters towards us.