Gemini’s powerful new instrument for studying planets beyond the Solar System, the Gemini Planet Imager (GPI), has successfully received its first starlight for engineering and testing on the night of November 11-12. On-sky observations are currently ongoing for technical integration with the Gemini South telescope. The GPI team (Figure 1) began the 7-night observing run began with a head start, since preliminary pupil and pointing alignments were completed early, due to extensive preparatory work and smooth integration since the instrument arrived at Gemini South in August. 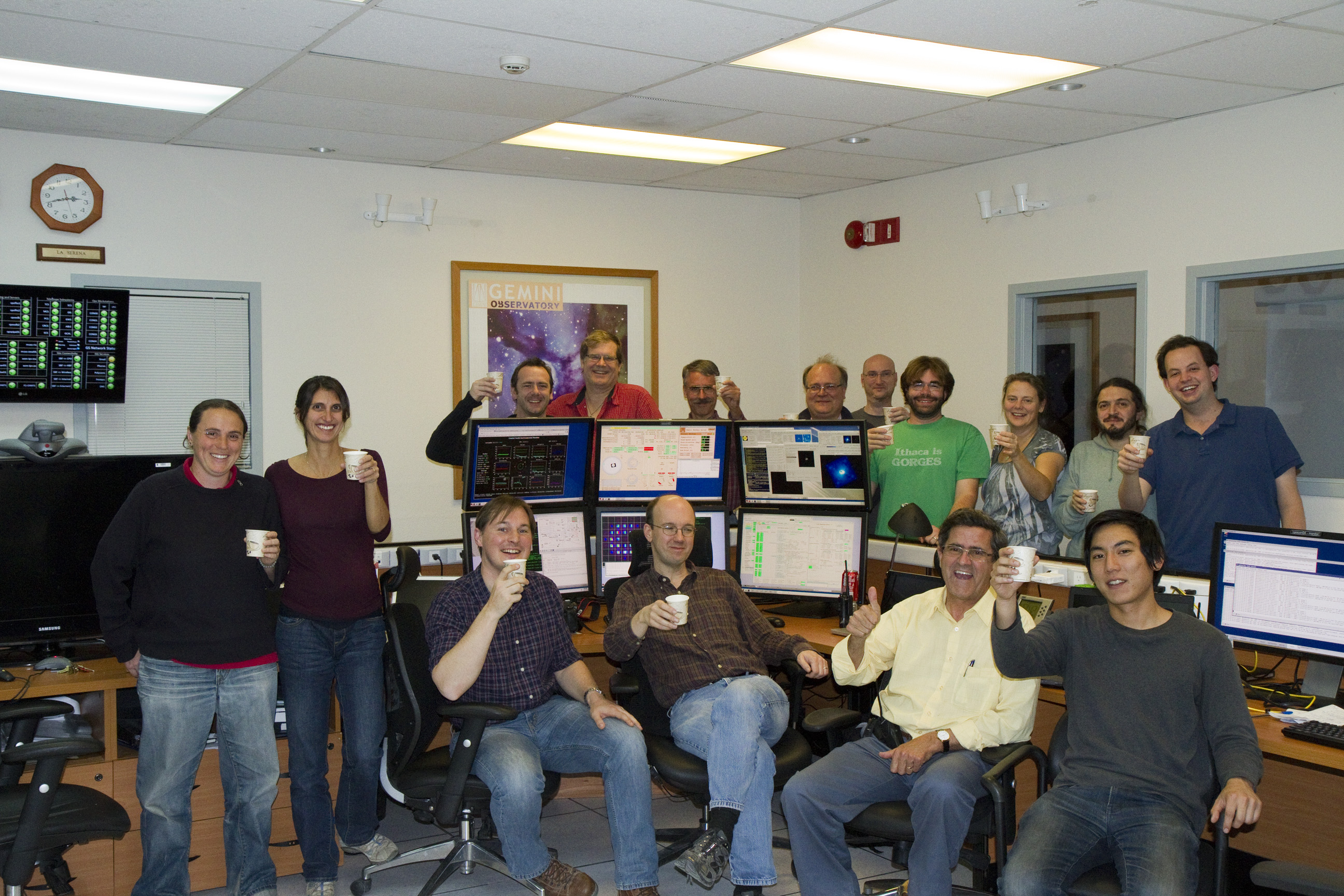 “We locked the AO system on the first try with the first star we looked at. Watching the starlight smooth out on the wavefront sensor was amazing,” said GPI Principal Investigator Bruce Macintosh.

Progress and performance to date has been very good (Figure 2&3). According to the team, the adaptive optics system operates routinely and has been locked on more than 30 stars spanning a range of brightnesses, and zenith distances. GPI is communicating with the telescope and controlling the telescope’s secondary mirror to adjust pointing and focus. The team took the first calibration images with the infrared spectrograph and coronagraph on the night of November 12. 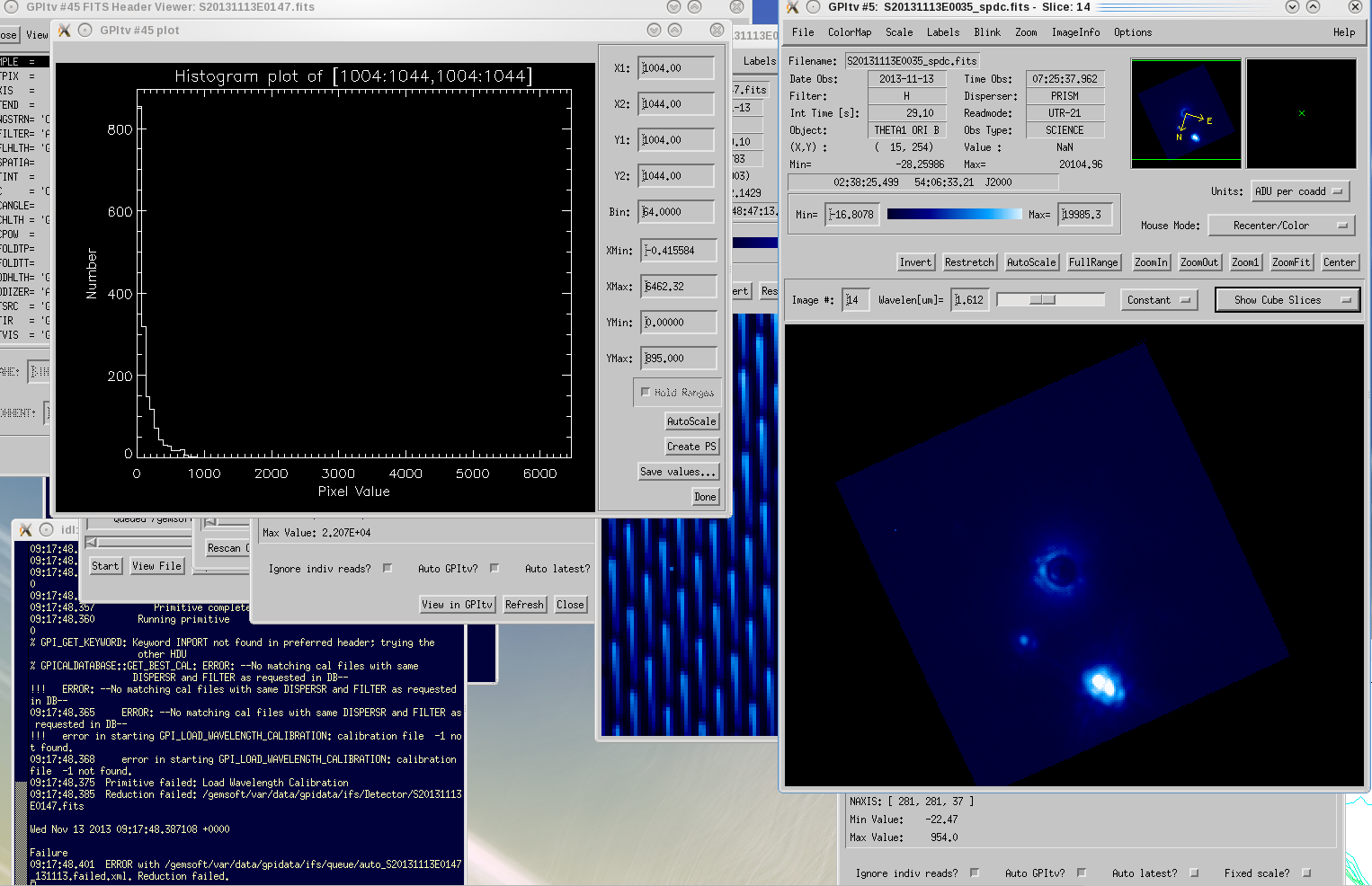 Figure 2. Image of a GPI control screen capture showing the test star Theta 1 Orionis B1 (blocked by the coronagraph), with cluster members B2, B3, and B4 also visible in the field (lower right blue image).

GPI moves Gemini into the next generation for exoplanet studies. The “extreme” nature of its adaptive optics system will allow measurement of companions that are a million times fainter than their host star. Beyond simply obtaining images for detection, GPI provides spectroscopic and polarimetric measurements to characterize exoplanets in great detail. Once fully commissioned the instrument will be set to embark on a campaign of planet discovery. 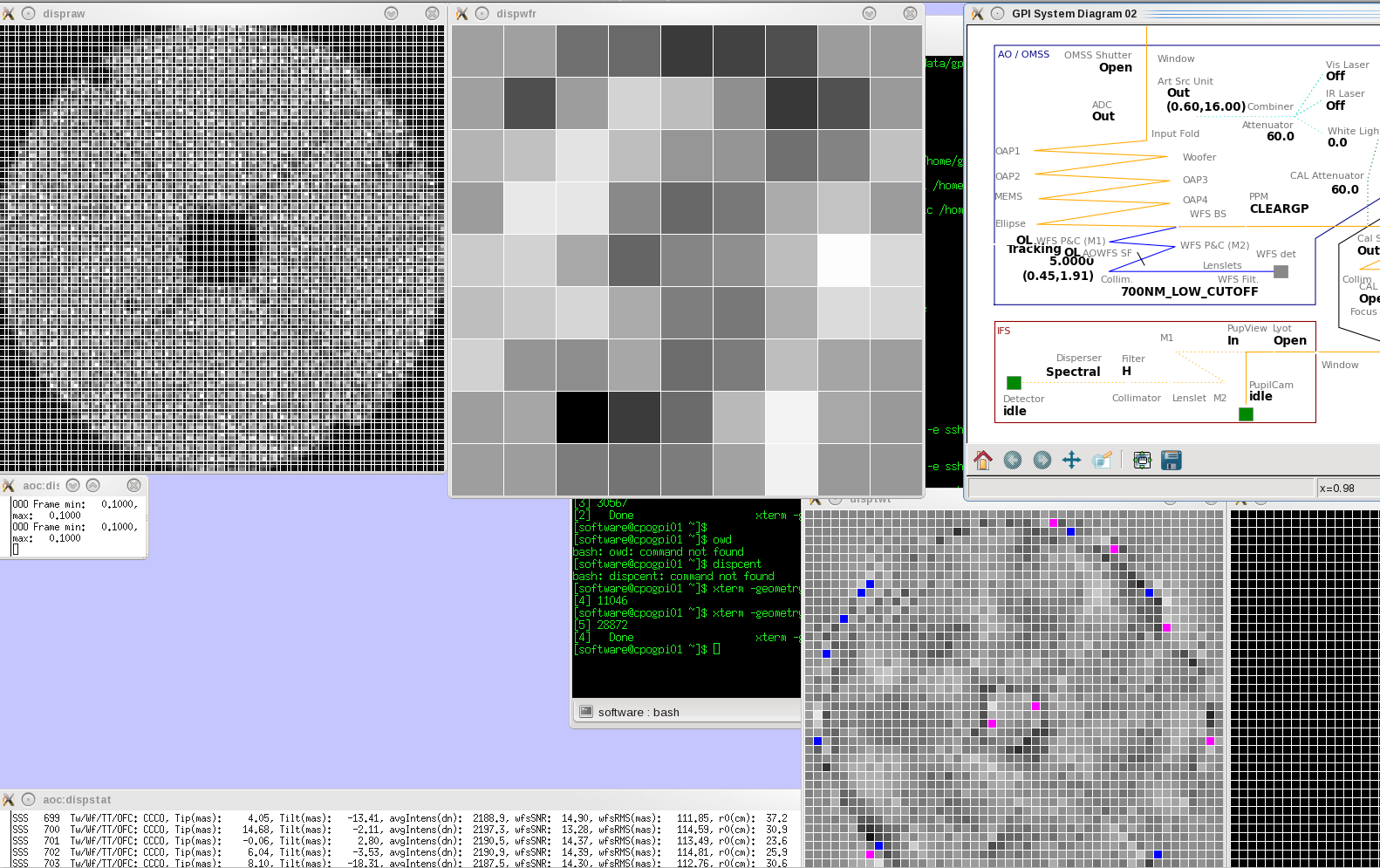 “We have hit the floor sprinting,” according to GPI Project Manager Stephen Goodsell. “I’ve been involved in many commissioning teams over the last 15 years and this is the most capable, dedicated and functional integrated contractor-observatory team by far. Everyone is playing their part and our results to date reflect everyone’s continuous hard work and belief in the project.”

These technical integration tests with starlight will be followed in December by the start of the commissioning and verification stage of the project. During this stage the team will begin to observe science targets of interest to help understand parameter space, baseline performance and allow for some system optimization through software tweaks on-sky. This will prepare GPI for transitioning the instrument to regular science operation.

Goodsell adds, “We have to keep reminding ourselves of the purpose of the technical integration run and stick to our plans, resisting the temptation to look at scientifically interesting targets at this stage. Ultimately, successful completion of the technical integration tasks will allow astronomers to focus on the more interesting aspects of commissioning during the next stage. Then it won’t be long before the community will be able to use GPI to discover worlds and characterize them. This will add immensely to astronomers’ understanding of exoplanetary systems and the diversity of planets in our neighborhood of the Milky Way Galaxy. However, for now, we continue to focus on technical integration. Exciting times lie ahead for our team and Gemini’s users!”