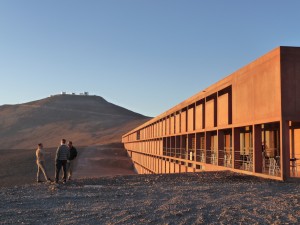 Joel, Paolo & Paolo discussing after dinner at the residencia. In the background the top of Cerro Paranal and the Very Large Telescope.

It is Monday morning and I am sitting in the control room of the VLT, at the console of UT3-Melipal, with Elena, Joel and Duncan. It is half past three, Chilean time, and we still have a couple of hours to go. The last two nights have been rather busy and tiredness starts to accumulate. So, I decided to summarize what has happened so far in one single post. As we get used to the night shift, we tend to wake up later and later in the day. Nevertheless, we still make to the control room well before dinner and we have the chance to discuss the progresses made during the day by Hans. Yesterday, for instance, he had to replace an halogen UV calibration lamp that had burned during the previous night. The voltage was too high and he had to adjust it to avoid further failures.

Even though X-Shooter is not the most complex instrument mounted at the VLT, it is not the simplest one either. Heavy instruments are usually mounted at the Nasmyth foci of the VLT. In this configuration, the light undergoes three reflections before reaching the instrument: on the main mirror, on the secondary mirror, and on a tertiary mirror, that deviates the light by ninety degrees and brings it to one of the sides of the telescope. Of course each reflection implies some unavoidable light losses. 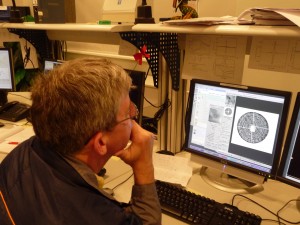 Hans watching the pupil. The cross visible in the center is the spider that holds the VLT secondary mirror.

The number of reflections can be decreased to two in the so-called Cassegrain configuration, where the light, after being reflected back by the secondary mirror, goes through a hole made in the main mirror and reaches the instrument. This solution produces a larger efficiency (less photons are wasted), but poses some limitations on the weight of the instruments one can attach to the telescope. In addition, since the instrument moves coaxially with the telescope, it will undergo the action of gravity in a way that depends on the telescope pointing. Usually, this is not a problem for low resolution spectrographs, but it is certainly an issue for an instrument like X-Shooter. Therefore, in order to couple high efficiency to stiffness, the instrument is equipped with an active flexure compensation system. The thing is rather complicated (I am actually not sure I got all the details Hans gave me), but the concept is that there is a series of computer controlled mirrors, mounted on piezoelectric devices, that move to compensate for the flexures, keeping the optical beams always aligned with the instrument optics. Also, there is a system which corrects for the temperature variations, that would otherwise deform the instrument and reduce its performances. Of course, we are talking about tiny deformations, that would nevertheless be quite disturbing for the accuracy X-Shooter was built to achieve. 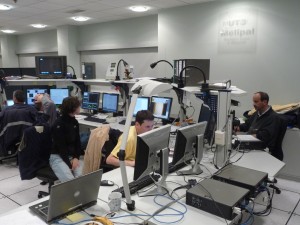 Working at the UT3 console. Paolo (Santin) sits in his favorite station behind the computer screens.

These functions (and other that I do not mention here) have to be tested under real operating conditions, to see how they perform in extreme cases and how reliable they are. This is exactly the purpose of commissioning runs, as the one we are running. Even though the scientific performance will be thoroughly assessed during another phase (called science verification), some of our tests can be carried out using targets which are more appealing than spectrophotometric standard stars. The first of them is the famous Supernova 1987A. This target has been chosen because is of very general scientific interest (it is one of the most studied objects in the sky), but also because the acquisition of the object into the slit has to be done via what we call a blind offset. 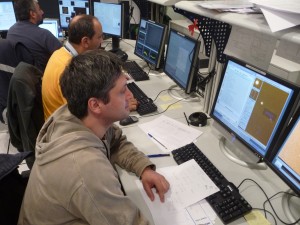 All modern spectrographs are built in such a way that it is possible to see the object to be studied through a camera. Knowing where the slit position is, it is then rather easy to move the telescope by the amount required to center the target onto the slit, the entrance aperture of the spectrograph. So far so good. But what if the target is very faint and cannot be seen in a relatively short exposure image taken by the acquisition camera? Well, in that case, a blind offset is your friend. What you need is at least a star in the field of view at a known angular distance from the object you wish to observe (measured by somebody else on very deep images). If you are in these conditions, then you just need to acquire the reference star under the slit. When you are happy with the centering, you offset the telescope by the known amount and, if everything has been done in the proper way, you can be [blindly] confident that your invisible target, is in the slit.

Finally, you can start a looooong exposure to get the spectrum. Now, SN1987 has faded away and the material that it has ejected at velocities that exceed 10,000 km per second, has reached other stuff that was lost by the progenitor star before the final explosion. This big crash has heated this material, which has started emitting radiation. This faint emission is the target of our observations. Since SN1987A appears to be very close to a relatively bright star, it is a perfect test case for our blind offset procedure. Since my research field happens to be nearby supernovae (and SN1987A is the closest SN in the last 400 years), it is unanimously decided that I should run the acquisition. Paolo (Santin), who has written the acquisition software, seats close to me, curious to see whether it works or not. 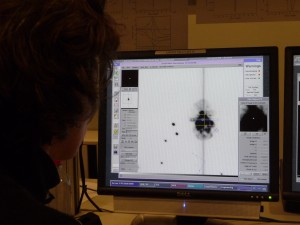 The configuration file (which we call OB) was prepared in the afternoon. We just fetch it from the database pushing a button, we run it, and the telescope starts slewing to the south, towards the Large Magellanic Cloud where the explosion site is located. After a while, when the position is reached, Duncan starts the active optics system which, using a bright star, computes the corrections to be sent to the actuators that hold the main mirror of UT3. In a matter of seconds the star, which was initially a bit of a banana, becomes a sharp bright spot on the computer screen. Meanwhile, X-Shooter has been configured by the instrument software and it is ready to start. In the acquisition camera we clearly see the reference star. But, since the conditions are good (the seeing is around 0.7 arcsec) we also see the SN remnant, as a faint ring. This is actually very good, because we will be able to check the effect of the blind offset we are going to apply (so, it will not be that blind, after all ;-). The procedure is very easy. The acquisition camera produces an image of the field. Once I have identified the reference star, I just select it with a mouse click. The software computes the offset to be applied and sends it to the telescope. After another iteration the star is perfectly centered. The telescope is now ready to perform the blind offset. I smile to Paolo, I push a button and I cross my fingers under the table. When I turn my head to the screen again, the ring of 87A is exactly where it was supposed to be. Well done, Paolo! I confirm the offset and the software configure the instrument for the spectrum. A small mirror is inserted and the light which was previously sent to the acquisition camera is now deviated to the inner parts of the spectrograph. The photons coming from about 150,000 light years away will now go through a series of optics, will be dispersed by the echelle grating, cross-dispersed by a big prism, and refocused onto the CCD detector. The integration starts. For half an hour we will be waiting…

When this is over, we will move to another striking object, Eta Carinae, which is slowly climbing from the depths of the southern sky. This is an incredible star, surrounded by a bipolar nebula that, in the Space Telescope images, appears as the product of a tremendous outburst. Since this is an extended object, we want to use it to test the Integral Field Unit of X-Shooter. This time it will be Elena’s turn to acquire it.

But I’ll tell you about it in my next post.

At the Campus Party Europe in Berlin