The Mapping of Pluto Begins Today

The OurPluto naming campaign has been an exhilarating experience for me so far. The amount of thought that our site visitors have been putting into their nominations astounds me. You can visit the Site News page for regular updates. Today I would just like to highlight a few of the new names that we added to the ballot last night. 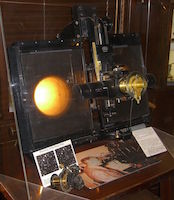 On the list of scientists and engineers, we have added Carl Pulfrich, 1858-1927. Although he died before the 1930 discovery of Pluto, he contributed in a critical way—he invented the blink comparator. This is a device that lets you switch back and forth between two sky plates, looking for subtle changes. Clyde Tombaugh discovered Pluto using a blink comparator. The discovery would not have been possible without the device.

From Europe, we were reminded of the importance of the Soviet The Luna Program: “Luna was a series of robotic spacecraft missions sent to the Moon by the Soviet Union between 1959 and 1976. Fifteen were successful, each designed as either an orbiter or lander, and accomplished many firsts in space exploration. They also performed many experiments, studying the Moon’s chemical composition, gravity, temperature, and radiation. Twenty-four spacecraft were formally given the Luna designation, although more were launched.”

Two prominent women explorers were also nominated. For Alexandrine Tinné, who explored the Nile and the Sahara in the 1860s, the nomination reads, “It is rare that we take the opportunity to praise some of the women who have contributed to the exploration of our world. Ms. Tinné was courageous, dedicated, and passed on a legacy of adventure for today’s women to aspire to.”

We also learned about Jeanne Baré who, a century earlier, became the first woman to circumnavigate the globe. She was naturalist studying the world’s plants. However, times being what they were, she had to impersonate a man for the journey.

Our fictional explorers now include several popular nominees. Among others, we include a pair of the great travelers in literature, Don Quijote and his patient squire Sancho Panza.

In the category of Underworld beings, we learned that the King of the Underworld in Vietnam has a Pluto connection. “Diem Vuong is the King of Hades. Demons obey and serve him. He is the ruler of the underworld and the judge of the bad souls after death. Diem Vuong once upon a time has been added to form “Diem Vuong Tinh” to name for Pluto in Vietnamese.”

In Inuit mythology, we learned that the realm of the dead has an astronomical connection. The souls of the dead first spend time under ground in Adlivun, but later ascend to a permanent home in Quidlivun, on the Moon.