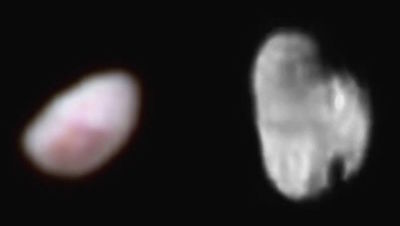 The best images so far of Nix and Hydra. Much better images will be sent down from the New Horizons spacecraft in early September

After the busiest July of our lives, the New Horizons team members have finally caught up on sleep. A few of us have even had a chance to take vacations. It’s good that we’re rested up, because an onslaught of new data from Pluto is about to begin.

Right now, 95% of the data obtained during the July 14 flyby is still stored on the spacecraft. After a quiet August, new images will start flowing down to Earth again on Saturday, We will get a few images almost every day. Why just a few? Well, Pluto is very far away, and the New Horizons transmitter is not very powerful. The downlink data rate is 125 bytes per second. For those who are old enough to remember dialup modems, this is slow even by that standard. It takes more than an hour for a single image to come down from the spacecraft. It will take almost a year before we have seen every image. That seems like a long time, but compared to the decade it took to plan, build and launch the spacecraft, and the second decade that it took to travel three billion miles to Pluto, waiting another year doesn’t seem so bad.

I am particularly looking forward to seeing some of our first closeup images of Hydra and Nix, two of Pluto’s small outer moons. Expect them to have weirdly irregular shapes, pockmarked by craters. The small moons of Pluto a particularly odd bunch. Whereas most of the moons in the Solar System rotate in a simple way, keeping one face toward the central planet at all times, we believe that Pluto’s moons might be tumbling chaotically. In a few days, maybe we will finally know for sure. Stay tuned.

By the way, every Friday the latest New Horizons images will be released to the public here: http://pluto.jhuapl.edu/soc/Pluto-Encounter/index.php