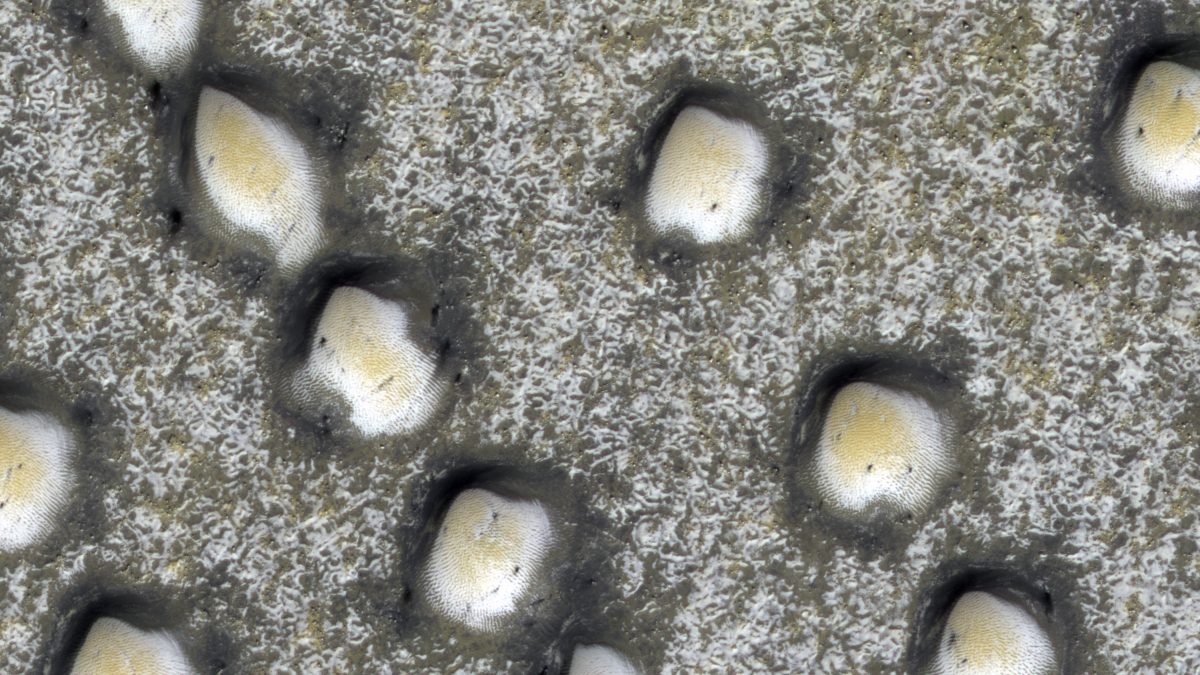 Trolling through the HiRISE image catalog, I came across some dunes that look a bit like bacteria.

(Well okay, they look like some sort of microbe to my eye, which is highly untrained in looking at microbes, so if that’s your thing then go ahead and shake your head. I’ll wait. Ready to move on?)

(On the other hand, if you have a pic of microbes that look like this, let me know.)

(Oh and I want to give a shout-out to a new Youtube channel Journey to the Microcosmos, which is absolutely mesmerizing.) 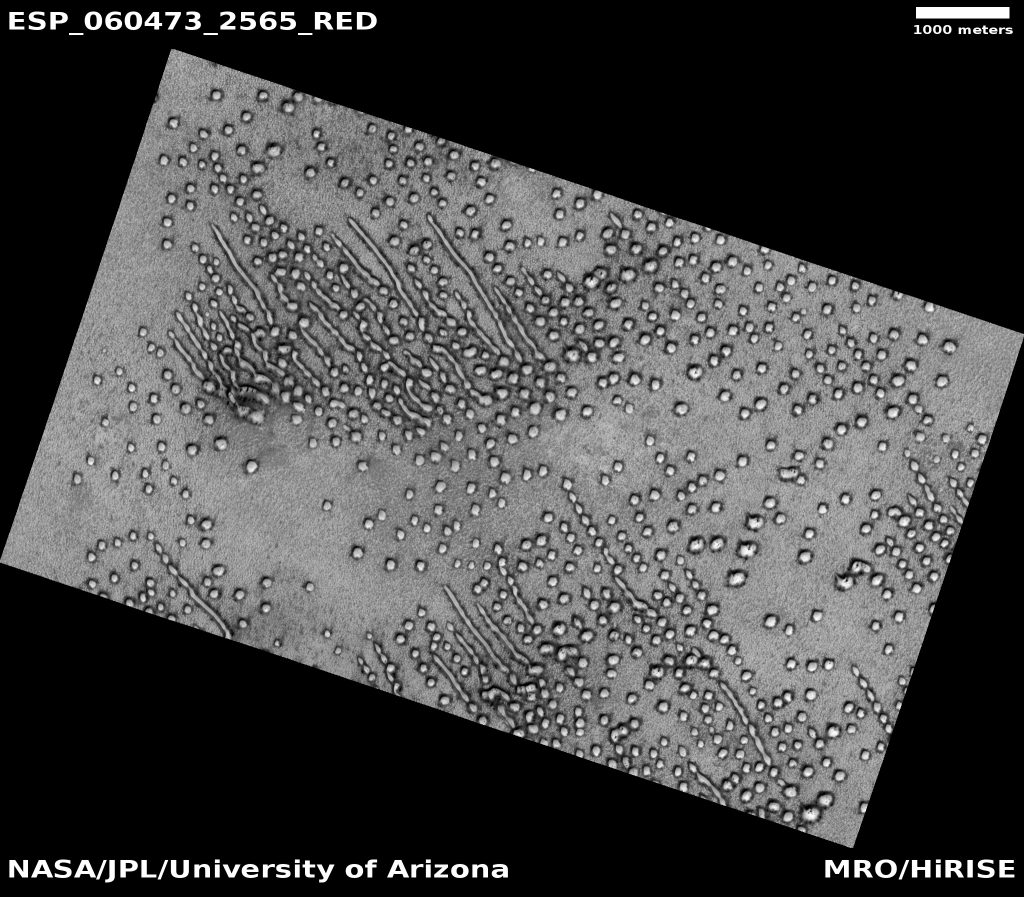 See what I mean? But no, these are big sand dunes, located on the north polar plains. They’re covered in winter frost that has just begun to sublimate away (this image was taken in mid-spring). Here’s a close-up that’s in color, showing the ripples that cover most of the dune surfaces: 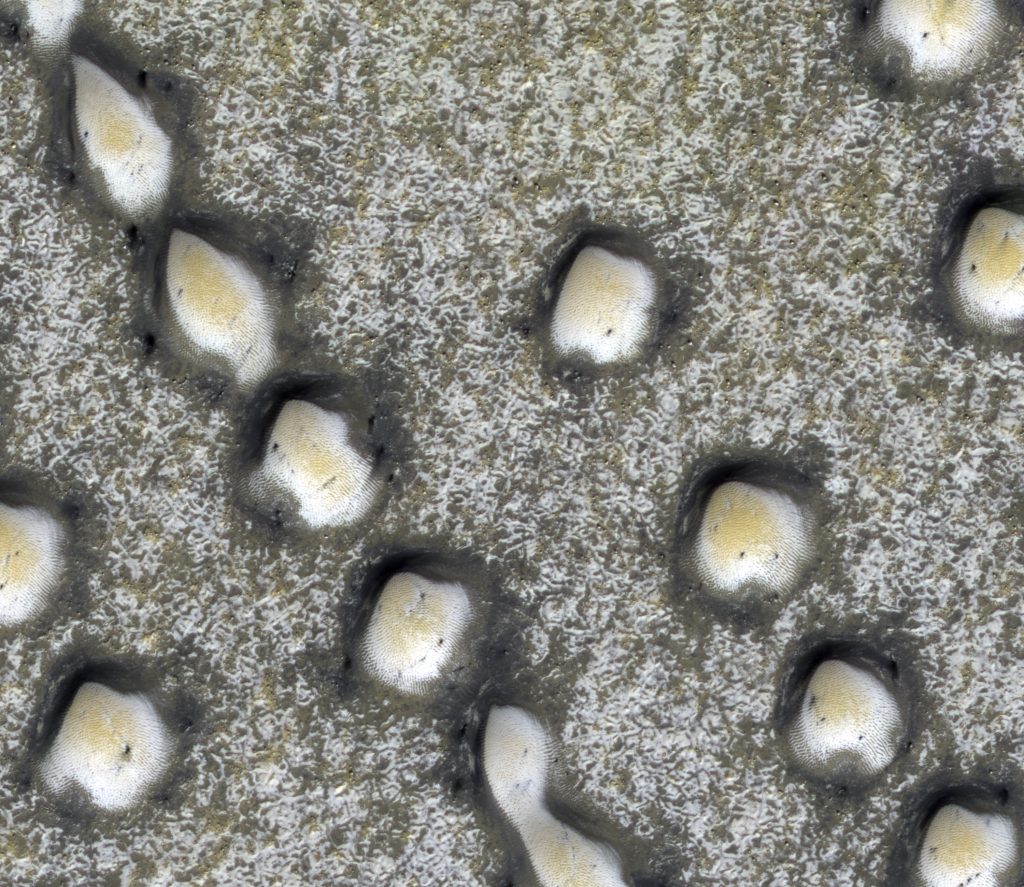 There’s a lot going on here, so I’ll cover some of the more obvious stuff. Each dune is about 100 m (330 ft) across. It’s topped with a layer of icing made of CO2 frost, which was then dusted with yellow dust. The dunes are sitting on patterned ground (also frosted), which is common at high latitudes on Mars. If you look closely at the patterned ground you’ll see a sprinkling of car-sized boulders. Look back to the dunes and you might be able to tell they’re covered in ripples 4 m (13 ft) apart, all made by the wind.

Normally dunes that stand alone like these are barchans, which are built by a wind blowing mainly from one direction. But these were built by two nearly equal winds (one from the lower right, one from the lower left). Where two nearly equal winds blow, on a plain without too much sand, dunes will form that more-or-less align with the vector sum of the winds. In some places here there’s just enough sand that the dunes can  connect together into linear dunes. It’s also possible that they were once all linear dunes that have had sand eroded away, forcing most of them to reshape themselves into solitary dunes.

That can happen on Earth too, like this example from Mauritania: 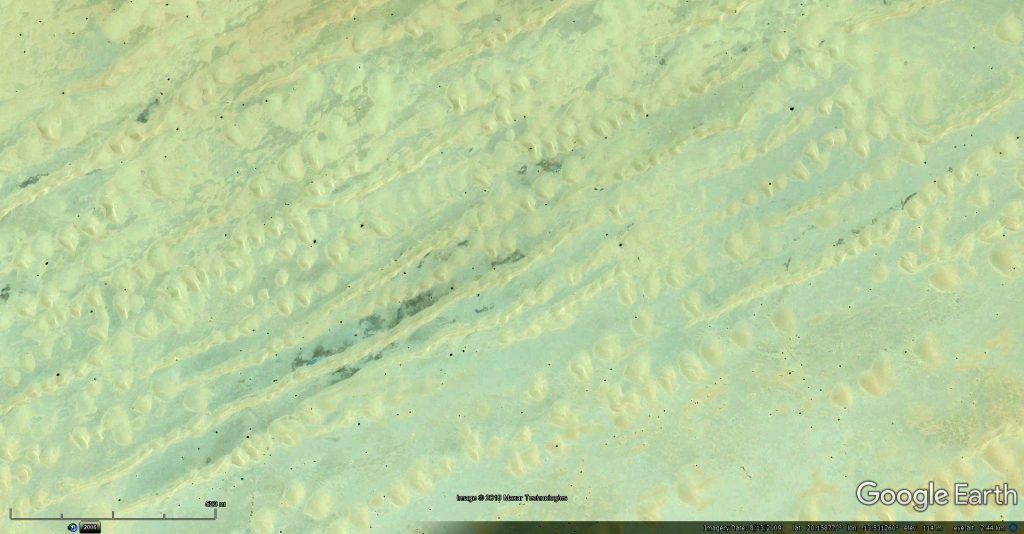 The wind pattern in the Mauritania example is more complex than the one in the Mars image. Can you tell what direction(s) the wind blows there?