Tour of the Telescope

Astrometric calibration is critical for GPI: When we see a faint dot near a star, the best way to check whether it is a planet orbiting that star, versus whether it is a background star along the same line-of-sight, is to compare the astrometry at a later date. Astrometry means measuring the stars — measuring the exact position in arcseconds and angle from North. But to figure out the size of our pixels on the sky, and the orientation of our camera and which way is North, we have to observe known groups of stars and measure their separations and angles. Then we compare our measurements to those from other instruments and tie that back to basic calibrations done in the lab with pinhole masks to create a common reference frame. This is how we calibrate astrometry.

But the field of view of GPI is very small, and it is hard to find a group of stars that are very close together, that also have a bright enough guide star for the AO system. Fortunately, MagAO observed an 8th-magnitude star in Baade’s Window at Magellan during our science run in April 2014, and we decided to try it with GPI. (Baade’s window is a clear window through to the galactic plane, so it’s full of stars that are thousands of parsecs away.)

We have to give credit to the PI of MagAO, Laird Close, for finding this field — it wins for the most stars (six!) visible in GPI’s field of view so far! Here is the GPI image compared to the MagAO/Clio image — both in H-band:

Left: Baade’s Window as viewed with MagAO/Clio in April 2014. Right: Baade’s Window as viewed with GPI in May 2014. Both images are in H-band and have been zoomed to the same field of view. North is up and east is left.  GPI sees 6 stars in this 20-minute image, plus you can also see the satellite spots that we use for calibrating the position of the coronagraph.  Clio does not currently have an H-band coronagraph, so the diffraction spikes are quite bright and block out the star at lower left in the Clio image.  The Clio image is about 7 minutes of data and it is unsharp-masked to bring out the faint stars.

We have also sent the field along to our friends at VLT/SPHERE, who are currently on their first-light run, because someday we will all be trying to compare our observations of the same planets, and that will be much easier if we can also compare our astrometric calibrations.

Although GPI’s field of view is small, MagAO/Clio’s is a bit larger and so we can bootstrap our astrometry from some of the stars seen wider out in the field. Here is the zoomed-out Clio H-band image: 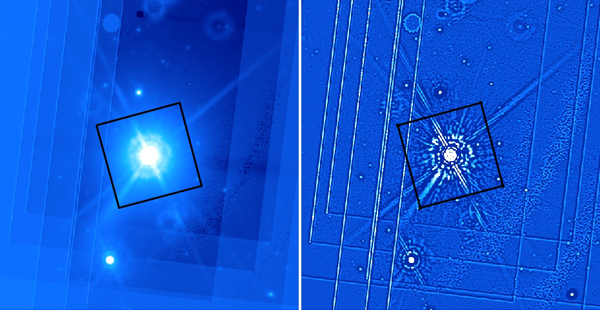 Zoomed-out view of Baade’s Window with MagAO/Clio in April 2014. The image is 10 arcseconds wide. Seven frames are mosaicked together, and it is 7 minutes of data. Right: Unsharp-masked.  This is a fairly quick reduction and so there are several image artifacts that should be ignored. But in the unsharp-masked image, you can see tens of stars!

Finally, here are the zoomed out images from both VisAO and Clio, where we have plenty of stars for boot-strapping:

Zoomed out MagAO/VisAO at z’ and MagAO/Clio at H-band. Time to get to strapping our boots!

This is a great example of what we gain with cooperation and synergy between complementary instruments and our scientific friendships!

Katie Morzinski is a member of the GPI instrument and GPIES science teams, and the MagAO Instrument Scientist at the University of Arizona.