The best proto-brown dwarf candidate so far: PR from Spitzer

PASADENA, Calif. — NASA’s Spitzer Space Telescope has contributed to the discovery of the youngest brown dwarf ever observed — a finding that, if confirmed, may solve an astronomical mystery about how these cosmic misfits are formed.

Brown dwarfs are misfits because they fall somewhere between planets and stars in terms of their temperature and mass. They are cooler and more lightweight than stars and more massive (and normally warmer) than planets. This has generated a debate among astronomers: Do brown dwarfs form like planets or like stars? 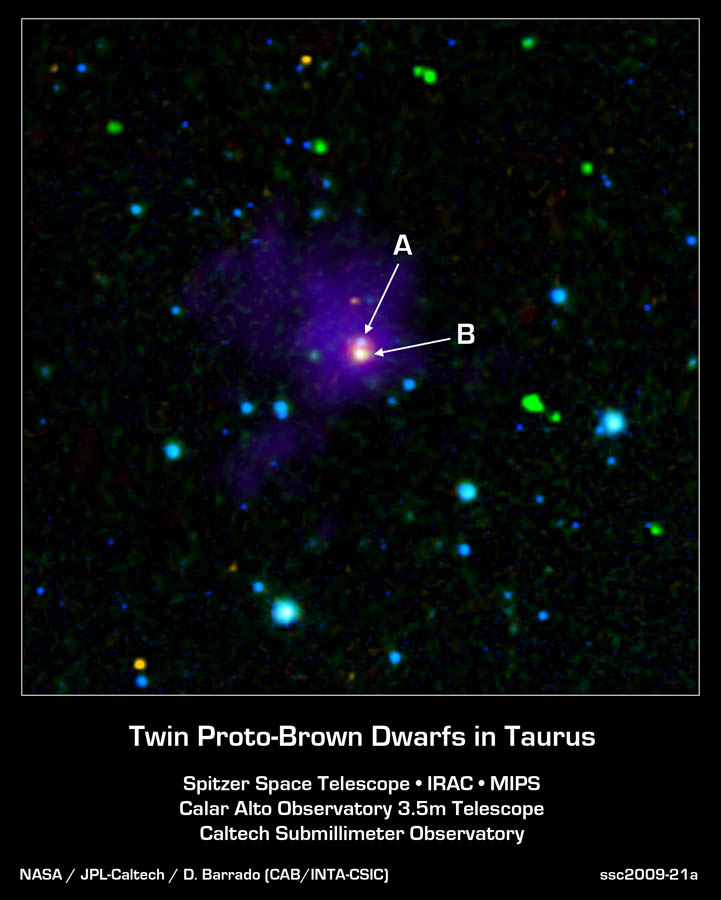 This image shows two young brown dwarf candidatess, objects that fall somewhere between planets and stars in terms of their temperature and mass. Brown dwarfs are cooler and less massive than stars, never igniting the nuclear fires that power their larger cousins, yet they are more massive (and normally warmer) than planets. When brown dwarfs are born, they heat the nearby gas and dust. Image with additional information at: http://spitzer.caltech.edu/images/2838-ssc2009-21a-Twin-Brown-Dwarfs-Wrapped-in-a-Blanket

Brown dwarfs are born of the same dense, dusty clouds that spawn stars and planets. But while they may share the same galactic nursery, brown dwarfs are often called “failed” stars because they lack the mass of their hotter, brighter siblings. Without that mass, the gas at their core does not get hot enough to trigger the nuclear fusion that burns hydrogen — the main component of these molecular clouds — into helium. Unable to ignite as stars, brown dwarfs end up as cooler, less luminous objects that are more difficult to detect — a challenge that was overcome in this case by Spitzer’s heat-sensitive infrared vision.

To complicate matters, young brown dwarfs evolve rapidly, making it difficult to catch them when they are first born. The first brown dwarf was discovered in 1995 and, while hundreds have been discovered since, astronomers had not been able to unambiguously find them in their earliest stages of formation until now. In this study, an international team of astronomers found a so-called “proto brown dwarf” while it was still hidden in its natal star-forming region. Guided by Spitzer data collected in 2005, they focused their search in the dark cloud Barnard 213, a region of the Taurus-Auriga complex well known to astronomers as a hunting ground for young objects.

“We decided to go several steps back in the process when (brown dwarfs) are really hidden,” said David Barrado of the Centro de Astrobiología in Madrid, Spain, lead author of the paper on the discovery in the Astronomy & Astrophysics journal. “During this step they would have an (opaque) envelope, a cocoon, and they would be easier to identify due to their strong infrared excesses. We have used this property to identify them. This is where Spitzer plays an important role because Spitzer can have a look inside these clouds. Without it this wouldn’t have been possible.”

Spitzer’s longer-wavelength infrared camera penetrated the dusty natal cloud to observe a baby brown dwarf named SSTB213 J041757. The data, confirmed with near-infrared imaging from Calar Alto observatory, revealed not one but two of what would potentially prove to be the faintest and coolest brown dwarfs ever observed.

Barrado and his team embarked on an international quest for more information about the two objects. Their overarching scientific objective was to observe and characterize the presence of this dusty envelope – proof of the celestial womb of sorts that would indicate that these brown dwarfs were, in fact, in their earliest evolutionary stages.

The twins were observed from around the globe, and their properties were measured and analyzed using a host of powerful astronomical tools. One of the astronomers’ stops was the Caltech Submillimeter Observatory in Hawaii, which captured the presence of the envelope around the young objects. That information, coupled with what they had from Spitzer, enabled the astronomers to build a spectral energy distribution – a diagram that shows the amount of energy that is emitted by the objects in each wavelength.

From Hawaii, the astronomers made additional stops at observatories in Spain (Calar Alto Observatory), Chile (Very Large Telescopes) and in New Mexico (Very Large Array). They also pulled decade-old data from the Canadian Astronomy Data Centre archives that allowed them to comparatively measure how the two objects were moving in the sky. After more than a year of observations, they drew their conclusions.

“We were able to estimate that these two objects are the faintest and coolest discovered so far,” Barrado said. Barrado said the findings potentially solve the mystery about whether brown dwarfs form more like stars or planets. The answer? They form like low-mass stars. This theory is bolstered, because the change in brightness of the objects at various wavelengths matches that of other very young, low-mass stars.

While further study will confirm whether these two celestial objects are in fact proto brown dwarfs, they are the best candidates so far, Barrado said. He said the journey to their discovery, while difficult, was “fun. “It is a story that has been unfolding piece by piece. Sometimes nature takes its time it give up its secrets.”

A tour in Paranal, including an earthquake