The immobility of the Earth, the condemnation of the copernican theory and the tribulations of Galileo

Night talk under the starlight

This year we celebrate, among other facts, the fourth centennial since Galileo Galilei used for the first time a rudimentary telescope to observe the sky and, doing so, to open a new universe to humankind. So, as a small homage, I would like to write his story. At least part of it, including the cost he had to pay for daring to have a different view, a different behavior …

… Certain dates would have to be erased of the calendar, are deserving of the opprobrium and the shame. One of them is the 24th of February, so close to his birthday on February 15th. On that date in the year 1616, a commission of consulting theologians of the Inquisition, censured the heliocentric theory of Copernicus and reaffirmed the Earth immobility. 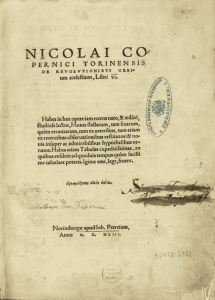 Cover of “De Revolutionibus Orbium Coelestium” (On the movement of the celestial spheres), by Nicholas Copernicus, in the 1543 edition.

In fact the process was somehow more complicated. It began the 19 of February with the proposal of censorship of an expert belonging to the commission, which did not include an astronomer. It continued with a meeting of the Congregation of Holy Office, which started by the reprimand to Galileo by order of Pope Paulo V, carried out on the following day by Cardinal Bellarmino. At that moment, it is prescribed to Galileo that he must leave the opinion that Earth moves. On March 1sr, Congregation of the Index prohibited a series of books related to the copernicanism and its validity from a theological point. Moreover, the copernican work “De Revolutionibus Orbium Coelestium” (On the movement of the celestial spheres) is suspended until its “correction”. We should remember that the heliocentric theory, and the mathematical model which accompanied it, were essential to calculate in a simple and accurate way, the movements of planets, and was also were related to the calendar reform. This was probably the real reason why was not forbidden at that time. The decree was publish several days later, on March the 5th. 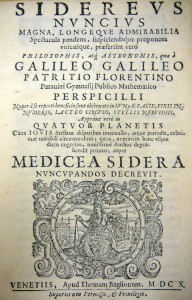 Cover of the edition princeps of “Sidereus nuncius” (Sidereal messenger), a short pamphlet in Latin published by Galileo in 1610, which will break down for ever the geocentric and aristotelian visions of the universe. Photo by the author, from a book preserved in the Crawford Library, Royal Observatory of Edinburgh.

The story of the tribulations of Galileo and his encounter and mix-ups with the ecclesiastical hierarchy, by all means, do not begin nor finish there. The beginning can be probably located in 1609, when Galile receives the news of the existence of a wonderful instrument, composed of lenses, which was able “to approach” the objects. With this limited information, Galileo built its first telescope during the summer of that one year. In December the 1st he already was observing the firmament with telescopes of suitable quality. And it is then when a new universe opened up for him, and also for us, intellectual inheritors of the Galilean work. Between its multiple discoveries, we can name the spots present on the surface of the Sun, the mountains of the Moon, the phases of Venus, the four main jovian satellites, the rings of Saturn (without realizing its nature), the explanation of the tides, the large stellar density within the Milky Way, the use of the telescope and the pendulum as scientific instruments, laws of dynamics, studies on the how objects fall, among others. It is indeed the discovery of the sunspots what it puts to him in direct collision with the order of the Jesuits, due to the dispute about the priority of the discovery and the meaning of this phenomenon that he maintained with father Christopher Scheiner, who insisted on the sky incorruptibility. Another dispute with another member of that religious order, in this case Horazio Grassi, was due to the nature of the comets. Moreover several intellectuals related to other religious orders (although also Galileo also found allies within some of them) will attack Galileo in an implacable way.

Several years later, on June 22nd 1633, in spite of the protection of the Dukes of Tuscan, the powerful Medici family, Galileo will be formally condemned by the Inquisition and forced to abjure, on his knees and under the threat of torture, of the Copernican theory, which was already described as heretical. The process was at the request of his supposed friend, the Pontiff Urban VIII, who had been elevated to the papal throne in 1623. 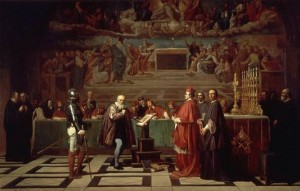 The abjuration of Galileo Galilei before Roman Inquisition, June 22nd of 1633, according to a picture of century XIX painted by Joseph-Nicholas Robert-Fleury.

The story of Galileo and prohibition of his book “Dialogue on both great systems of world”, where he clearly exposed the superiority of copernican theory which situated the Sun in the center of the universe (and therefore forced the Earth to move around it, which was against the literal interpretation of certain passages of the Bible) against the geocentric and geostationary interpretation of Claudius Ptolomy is, truly, fascinating. Galileo was able to publish the book in spite of the limitations imposed by Urban VIII during the edition process, which was completely supervised by the Roman hierarchy. As a matter of fact, they gave him, initially, the “imprimatur” (approval), the official declaration by the roman church of being free of moral or doctrinal error.

All this process is, in truth, of great complexity. It is worth of the best novel about political conspiracies in the Italian Renaissance. The antecedents are located practically a century before (with the development of the heliocentric theory by Nicholas Copernicus). It includes the procedural methods of the Inquisition, that were avoided or even they were contravened in the case of Galileo. It also contains an ideological war between those supporting him and his enemies in the academic world. And, as the perfect stage, the international politics, including the struggle between Catholicism and Protestantism and the confrontation between Spain and France for the European supremacy. In fact, it is this fight which forced the reorientation of the policy of Urban VIII. And it might as well have an influence in the pope change of opinion, so drastic, with respect to the work of Galileo. The end of the story, if it has finished, reaches the XX century (starting in 1979), with the revision of the case by a commission of experts at the suggestion of the pope John Paul II. The so called Galileo’s case seems to be filled with multiple manipulations by Roman Inquisition and by several historians, including fraud and the shameless distortion of the available evidences.

“Eppur si muove”… Probably Galileo, old and defeated, did not pronounce this phrase when leaving the room where he was forced to abjure the heliocentric theory. And nevertheless Earth moves…

In any case, Galileo Galilei is one of the greatest scientists for all times and father of the modern Physics. Thanks to him, we can, indeed, affirm “eppur si muove”.

Night talk under the starlight