After spending six years in the desert (Arizona) in grad school, I am totally loving living in a place with seasons again. I’ve lived in Maryland for a little over a year now, and am just as excited about fall this year as I was last year.

You see, it’s still 100+ in Phoenix, which I don’t miss at all (the heat at least, although I do miss my grad school buddies alot). I grew up in Arkansas, where we got four seasons and the trees changed color in the fall, so I guess Maryland feels more like home. It’s also cool living somewhere that feels rural (in that I have trees and wildlife—deer and foxes etc.—behind my house) but also being 10 minutes from a Metro station where you can get down to DC very easily. Best of both worlds. 🙂

So what’s going on in my astronomy world? A lot! As usual… Very excited about the press release a few weeks ago of the Early Release Observations of the newly refurbished Hubble Space Telescope! What gorgeous images! If I had to pick a favorite, it would probably be the one of Stephan’s Quintet: 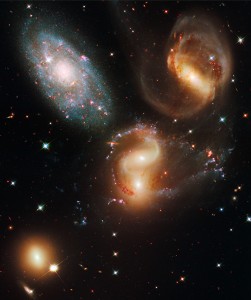 Although, this is the most phenomenal image of a gravitational lens I have ever seen: 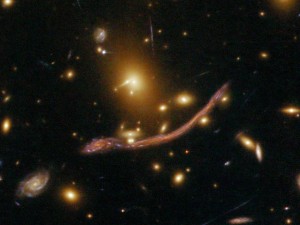 I’m on the Early Release Science team for the Wide Field Camera 3—one of the new instruments installed on Hubble—and am very excited about new data being taken as I type this! In fact, I’m leading a paper on WFC3 grism observations, where we get to see spectra from many galaxies at once, that allow us to determine physical properties of the galaxies like how far away they are, how many stars they’re forming, etc. That grism data is scheduled for the near future, and I’m looking forward to working with it!

In addition to my daily life as a scientist (working with data, coding, reading and writing papers and grant/observing proposals), the past few weeks I’ve started to become more officially involved with outreach efforts here at Goddard concerning the James Webb Space Telescope, which is scheduled to launch in 2014. Check out the link for cool JWST stuff. 🙂 This is an amazing telescope and I’m very excited to be working under this project–both science-related (in my research) and now with the outreach team. I’ll also give a plug to the great podcast we have here at GSFC—blueshift. The most recent podcast is an interview with John Grunsfeld, who I had a pic taken with recently (that’s in my last post).

Looking to Lani in Hawaii