Looking for signs of life on Kepler 186-F

Consider this post, which firmly states that proto-Earth Kepler 186-f has a 50% chance of harboring technologically equipped intelligent life:

Although about science, this blog is primarily lacking in real science. By my reckoning, even the most optimistic assumptions indicate a probability of << 1/1000. But that is the topic of another blog. 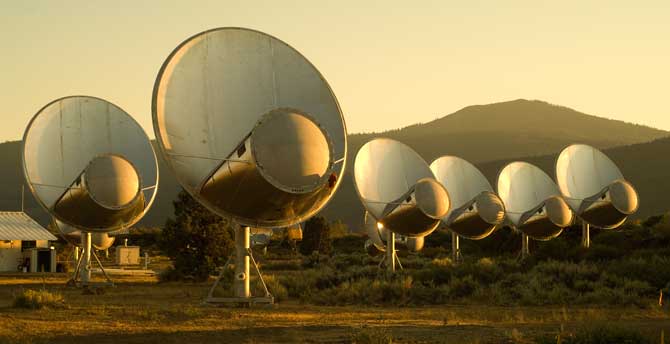 A few of the 42 radio dishes of he Allen Telescope Array at the time of its dedication in October 2007. Photo courtesy of the SETI Institute.

Here I’m exposing greater detail about a secret experiment conducted at the SETI Institute in March and April of 2014.

On 18-April-2014, Elisa Quintana and several co-authors made the cover of Science magazine with the discovery of the most Earth-like planet ever observed, anywhere. Impressively named, planet “f” orbits the 186th star in the Kepler catalog. Imaginatively nicknamed, Kepler 186-f is about 500 light years from the sun.

To our good fortune, Dr. Quintana made this discovery in her capacity as principal investigator at the SETI Institute, and those of us doing radio SETI with the Allen Telescope Array were favored with early knowledge of the discovery. You see, Quintana et al. hold themselves to the highest standard of scientific ethics and did not announce their discovery until their paper had received full peer-review. That is, unbiased and anonymous experts in the field were confidentially consulted by Science magazine, and those experts agreed that Quintana’s paper was both valid and suitable for publication. While this was the right thing to do, there were several nervous weeks between the time the paper was submitted and when the paper was finally published. During this period, public discussion of Kepler 186-f was “embargoed,” a technical term for “secret.” Only employees at the SETI Institute, who are bound by contract to keep company secrets, knew about the discovery.

This was an exciting time. We pointed the Allen Telescope Array (ATA) in the direction of Kepler 186-f and listened for signs of technology embedded in radio signals between 1-9 GHz. As far as I know, besides Quintana herself only a handful of people knew what we were doing with the telescope as we hunted in the same direction over and over again. This was our big chance, we had a head-start on every other observatory in the world, and 186-f was a very good candidate for finding technology.

In case you haven’t heard, the ATA is a radio interferometer telescope designed especially for the search for extraterrestrial intelligence (SETI) and running SETI algorithms for 12 hours every day. For a ground-based telescope observing frequencies below visible, the optimal range is called the terrestrial microwave window (TMW, 1-10 GHz). The ATA is especially suited for SETI searches since it has an instantaneous coverage from 1-9 GHz, and we’re not afraid to use it! Most previous SETI searches have been constrained to observe only in lower frequencies (1-3 GHz) or in narrow slices of the TMW. The ATA leads the field in recognizing that the entire TMW is fair game for interstellar communications, and we made near-continuous coverage of 90% of the TMW.

We completed 2-3 scans over this range, with a sensitivity of ~100 Jy in 1 Hz (that is, a very good sensitivity). Multiple scans are important at frequencies >4 GHz, because signals sent continuously may still fade in and out over time due to scattering from interstellar gas on the way to Earth. Multiple observations increase the likelihood that our telescope will detect the signal.

Simply put, if about 500 years ago, 186-f were transmitting a tuning-fork like radio beacon, then we would have seen it.  Provided their transmitter were at least 8x as powerful as the most powerful transmitter on Earth, the Arecibo planetary radar. Considering that ET probably has better technology than humans do (since we are a very young technological civilization), this is far from impossible.

Each day, the signal reports came in, but there was no evidence of alien signals. We celebrated on the day that we finished the first complete scan 1-9 GHz of the planet. Even though we didn’t find ET, we knew that we could support Quintana’s discovery by helping to answer the obvious question, “So you’ve discovered an Earth-like planet, do you think it bears life?” By the time Kepler 186-f was published by Science, and the embargo was lifted, we had a very good sample including 2-3 scans over the planet. Whew! That was fun!

It is important to note that our SETI measurements do not prove there is no intelligent life on Kepler 186-f. If 186-f has intelligent life, then they might be sending signals weaker than we can detect, or they might be sending signals in the visible (optical) domain, or perhaps not at all in the direction of Earth. Future research may find signals we missed.

Kepler 186-f is just the first of uncountable planets that could harbor life “as we know it.” Extrapolations of Kepler results suggest that Earth-like planets are abundant. Still, life as we know continues to be evasive. As Fermi put it, “Where are they?”