What are the flavors of light? 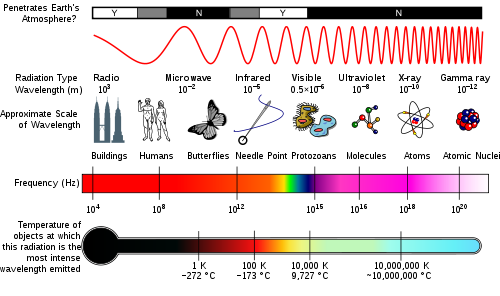 There are good reasons that almost everything we know about the distant universe came to us through measurements of light (electromagnetic radiation). Since light was present even at the birth of the universe, the field of astronomy predates just about everything. From another perspective, astronomy began when the first creatures looked up from the surface of their planet and asked, where does that light come from?

Since light is so important to astronomy, we should study the limits of light in every possible dimension, from extreme to extreme. There are four dimensions along which light may vary, but we don’t often give much thought to more than one or two. Here I take a moment to outline all the different ways light can exhibit itself.

The first dimension is color, or to physicists, frequency. The image at top describes only the frequency dimension of light. Those things we call radio waves, x-rays, gamma-rays, are all the same thing as light, with different frequencies. To physicists, the difference between what we call everyday light and x-rays (higher frequency) or cosmic microwave background radiation from the big bang (ironically low frequency) light is merely a constant and has no effect on the physics.

Today’s astronomy picture of the day shows us two more dimensions which are used to describe light. From the perspective where our telescope is the center of the universe, we speak of the direction of arrival of light. The direction of arrival is specified with two angles (in astronomy, right ascension, declination) but in human experience we normally approximate these angles as spatial coordinates (up/down, left/right):

With the two dimensions of  this display, and the dimension of color, that’s all there is, right? In truth, there is one more dimension, which we call polarization. Interestingly, evolution has not given our eyes sensitivity to polarization but it is an important physical property of radiation.

It is easy to see the effects of polarization with polarized sunglasses. Those kind of sunglasses work really well, especially when driving. This is because the light reflected off the hood of your car tends to be polarized in the horizontal direction, so by filtering out horizontally polarized light, you reduce “glare.” The  image below shows how a polarized lenses can alter your view of the world, proving the difference between information carried in two polarizations of light:

When we do SETI, we need to think about all four of these dimensions which can be used to describe the radiation that comes to us from the sky.  In future blogs, I intend to explore these dimensions in more detail and explore all the different ways nature, and ET, can send us information using light.