I totally admit it, I’ve been a slacker lately when it comes to this blog.  Sorry!  I could list the generic list of astronomer excuses (conference travel, referee reports, buried in data, lost in coding etc. etc.), which are all true, but I won’t go into the details and just let it be.  There.  🙂

But…what I have been doing is very exciting!  Starting way back in May, I went to the Shuttle launch of the fourth servicing mission to the Hubble Space Telescope (SM4), which was my first time to see a launch. It was amazing, and the entire mission was a huge success. Here are some awesome pics of the mission. My pics were a good deal less amazing but it was still really something to see a launch in person, and I highly recommend it if you get the chance sometime in the last remaining seven launches! The SM4 crew will be here at Goddard next week to give an overview of the mission and I can’t wait to see their presentation. 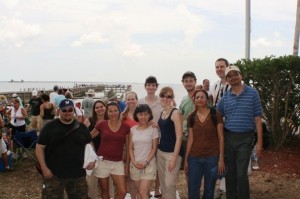 Group photo of the ASU crew at the launch

About seeing those launches…

I viewed SM4 from Titusville Space View park, which is somewhere from 10-12 miles away from the launch pad. Amazing. However, a few weeks later, I got an invite from NASA HQ to sit on an Education panel down at Kennedy Space Center…along with a VIP ticket to see Endeavor STS-127 launch from the Banana Creek viewing site, a mere 3 miles from the launch pad, inside KSC. Even more amazing! So I went, and the Education panel was very informative and lots of fun…but the launch was scrubbed due to a hydrogen fuel leak just hours before the scheduled liftoff. Man! So, home I went, sad that I missed my chance to see a launch from so close. But then a couple of days later, I got an email saying that our VIP tickets would be re-issued if we wanted to go back to KSC (this time on my own dime). So at the very last minute, I found a plane ticket for <$250, printed out my boarding passes for both my departure and return flight (only time I've ever done that!) and hopped on a plane back to Florida. I got to the Cape around midnight, and we were scheduled to leave the hotel around 3am for the early morning launch, so I didn't even get a room…just set up my laptop and hung out in the hotel lobby. …all the while listening in to Mission Control online, and hearing, to my great dismay, that there was yet another fuel leak. And yes, mere hours after my arrival in Florida, the launch was scrubbed again. Talk about disappointed (and angry for the money lost)! Oh well…these things happen, and much better safe than sorry when it comes to astronauts' lives. So I got back in my rental car and drove back to the airport and got on an early flight back home. I was on the ground in Florida less than 12 hours. I was very, very tempted to go back this past weekend for the scheduled Sat. evening launch, but glad I didn't after the repeated weather delays (I couldn't have stayed through Wed.). But STS-127 DID of course launch this week, and I wish them the best on their mission.

In addition to all my Florida trips, I've also been to France for a conference and to the White House in the past couple of months! And have had a paper accepted and another one submitted, and am celebrating the 40th anniv. of Apollo this week with everyone else. But those posts will have to wait til later…and I promise to post more often! 🙂 Happy weekend everyone!

Looking to Lani in Hawaii