Back from the Planetary Defense Conference – May is going to be CRAZY!

At the Planetary Defense Conference in Granada, Spain

I am back from Granada where I enjoy this very inspirational conference called Planetary Defense Conference (see my previous post). I would like to spend some time to discuss in this blog the technologies presented by various colleagues about the deflection of a potential asteroid threat. I realized listening to their talks that the limit between science and science-fiction is getting fuzzier as I am getting older.:-)

Most of you have heard already about the possibilities of using nuclear bombs to deflect an asteroid. This is technologically doable but only by an handful of countries. D. Dearborn from LLNL presented various simulations on the Tuesday afternoon session. There are a lot of problems linked with this technique. First of all, it is politically impossible to carry in space nuclear weapons since it can be considered as a threat by other countries. Additionally, the impact of a nuclear explosion on an asteroid depends a various parameters such as its size, interior structure, composition. Finally, if this asteroid, like 1/6 of the Near-Earth asteroids, is a binary then we will have to deal with 2 bodies instead of one, and it may be too late when you find out.

Some more original techniques such as gravity tractor was presented by E. Fahnestock, who was a student at our S4P program now a postdoc at JPL, and also by D. Yeomans also at JPL and member of the B612 Foundation. The simple idea consists in putting in orbit an array of spacecraft around an asteroid and slightly move it away from the Earth orbit using gravitational forces.I should also mention this idea of deflecting an asteroid using solar sublimation with a swarm of spacecrafts which concentrates the light on the surface of the asteroid  presented by M. Vasile from the university of Glasgow. The vaporized gas carris part of the angular momentum of the asteroid deflecting it slightly. These techniques can be considered only if the potential threat is detected years before the impact. Nuclear weapons are the only solution if we do not have the time to divert the asteroid with such smoothly pushes. I am attaching two images to illustrate these last concepts that, I am sure, you will find “intriguing” :-).

On the third day, there were a lot of discussions on the effect of an impact. I really liked the description of the Carancas event, an hyper-velocity impact crater which formed in the Altiplano on September 15 2007 by G. Tancredi. The meteorite had an estimated size of 3-8 m and it is very surprising that it formed this large crater. Simulations of impact in deep water by G. Gisler, from university of Oslo, suggested that ocean impacts of asteroids below 500m in diameter will NOT produce devastating long-distance tsunamis as previously thought. If this is confirmed, then we could just divert an asteroid in the ocean, a more than 2000 km from the coast line of any countries and the impact will not have major consequences. Finally, various people discussed how we can estimate the casualty, fatalities and damage produced by impact of asteroids from 10m to 100 km. G. Ortega from ESA showed impressive image animation based on realistic models of impact on mid-size city such as Granada, but also major urban area (Houston, Tokyo). I was surprised to see that various speakers were hired by insurance companies to do this work, so the idea of threat from an asteroid impact is definitely entering in a new era.

Ok, that’s all for today. This week is going to be crazy with the ESO proposals to review (I have still 65 more to read!), one proposal for NASA PGG to submit on Wednesday and various proposals for Lick-3m telescope to submit before Thursday. I am not sure I will write a lot of this blog, but I will try.

Questions/Comments about asteroid threat? please feel free to post them. 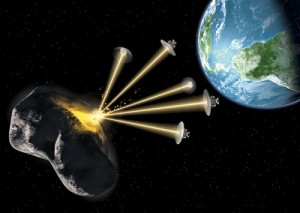 The concept of solar sublimation using an array of spacecraft which vaporizes the surface of an asteroid, deflecting its orbit (because of the action-reaction forces) 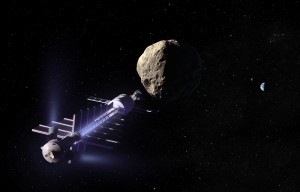 In this artist's conception, a "gravity tractor" positions itself near an asteroid to pull it away from a collision course with Earth (seen in the background) (credit: B612 Foundation)